When Google announced that it was kicking the can further down the road with 3rd-party cookies, it was no surprise. Anyone who follows the Privacy Sandbox, its struggles to find a workable alternative, and increasing scrutiny from UK regulators, knew they had no choice but to extend the runway. Almost four years have passed since they revealed plans to remove 3rd-party cookies from Chrome, but solutions like Floc, and, more recently, Topics, have fallen flat. This week, Google cited the need for more time to test new solutions, pushing the deadline to late 2024. One can’t blame the industry for looking at this timeline with skepticism—if Google, with its endless engineering resources, hasn’t found a solution in four years, is there a solution to be found? More to the point, will that solution benefit anyone but Google?

In an April ‘22 study from Twilio of 3,450 business leaders surveyed across 12 countries, 81% admitted to continued reliance on 3rd party data, and 55% indicated a general lack of readiness for a cookieless world. Yet, the uncomfortable truth is that the cookieless world isn’t in the distant future; it’s already here. 3rd-party cookies have long since been phased out by Apple, Microsoft, and Mozilla, representing an estimated 40% of web traffic. So, while it’s understandable that many will see Google’s announcement as a reprieve, now is the time for action, not apathy.

Thanks to almost a decade of data & identity expertise, we’re confident that there is a solution—multiple solutions, in fact, but they won’t come from Google or any other walled garden. Topics has proven to be of negligible value for Publishers, revealing little they don’t already know about their audiences. Worries abound that it will further increase the tech tax by introducing more middlemen into the equation. Most marketers have ignored it completely, and simply doubled down on their investment in Chrome since it’s the only 3rd-party cookie environment left. This, to put it mildly, is a mistake. Whether cookies disappear from Chrome today or two years from now, Google would still benefit considerably from monetizing its own data, but marketers and publishers would suffer drastic decreases in revenue and efficiency. It will be tempting for many to procrastinate, but with 40% of web traffic already at stake, and the increasing importance of never-cookie environments like CTV, complacency is a dangerous trap to fall into. Simply put, waiting for Google to save the day benefits no one but Google.

As our colleague Rudy Grahn pointed out in his recent byline on holistic A&M, better tech isn’t the answer—better strategy is. Smart advertisers and publishers will use this extra time to invest in collecting, understanding, and operationalizing their own 1st-party data and exploring alternative identity solutions that will future-proof their revenue, protect their investments, and safeguard consumer privacy. The data & identity ecosystem is crowded and evolving quickly—for most marketers, success will involve a complex cocktail of deterministic, probabilistic, and contextual partners and a lengthy test-and-learn roadmap. Thanks to Google, we now have the time—it’s up to us not to waste it.

Data & Identity from Prohaska Consulting is designed to help brands and publishers cross the chasm from dependency on 3rd-party cookies to an independent strategy rooted in first-party data and cookieless technology. Interested in learning more? Let’s talk

The Identity Partner List 5.0 from Prohaska Consulting categorizes leading regional and global solutions providers to help brands gain a better understanding of the post-cookie identity and targeting landscape. Get the list! 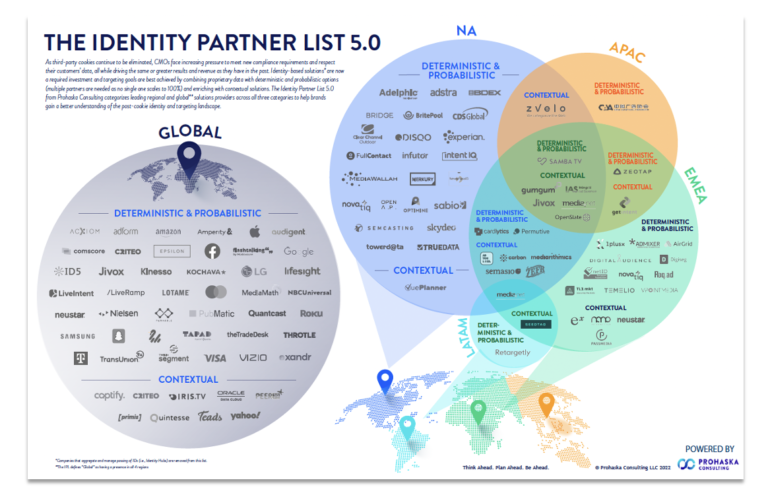